Boot in the Face 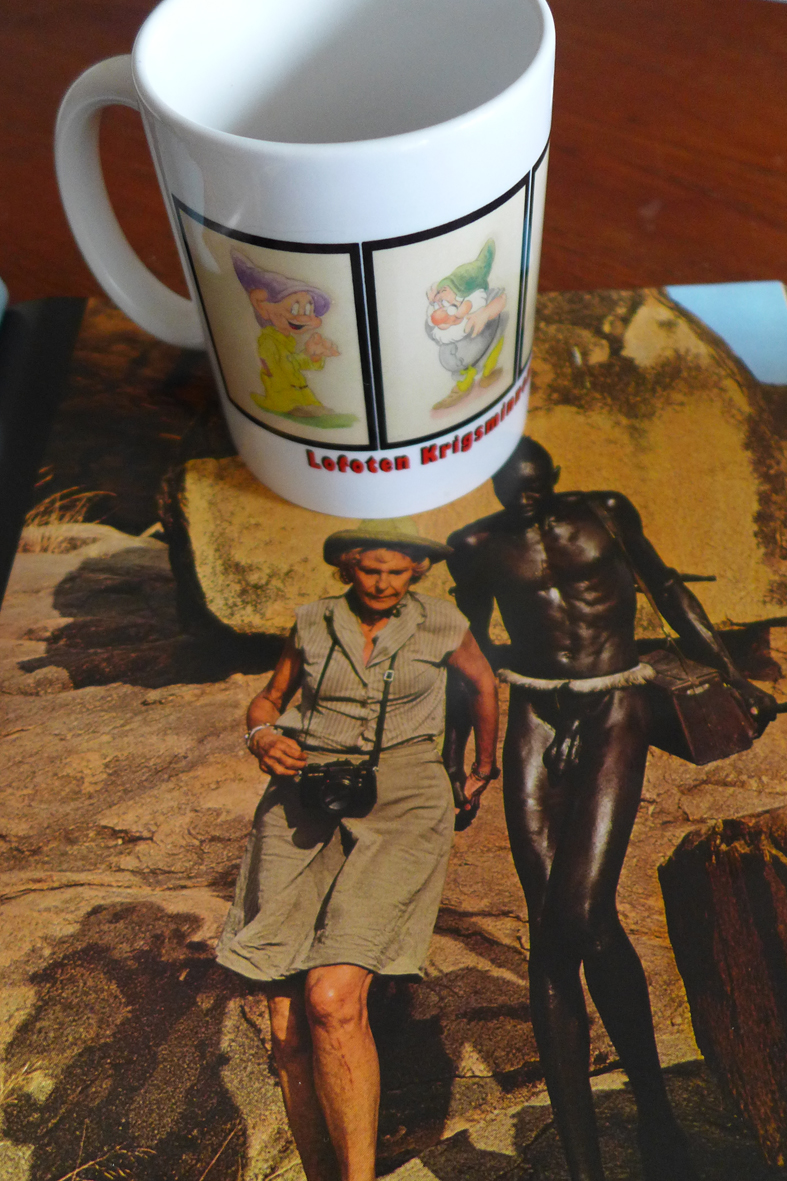 I've been bothered by this photography of Leni Riefenstahl since first seeing it in a book given to me on my 19th birthday. I am currently showing with Rieifenstahl in MONA, Tasmania in a show called Red Queen.

Riefenstahl, who is best known for directing the Nazi Party films, went to Africa in 1962 aged 60 to live with the Nuba people in Sudan. She claims that she didn't go as a documentary maker, she just wanted to live with them and understand them, which seems disingenuous as she took an enormous amount of film stock and a camera man who she trained herself along with her. Even if she did intend just to live with the Nuba, her action of inviting herself into the tribe seems to demonstrate how she seems unable to consider the effect her actions/work might have on others.

Recently LF has danced into my life again, this time more circuitously, through a photograph of my great, great uncle taken in 1890 in Zanzibar (which forms the basis of my works Nowhere Less Now). The date of this family photograph is also the date of the Heligoland-Zanzibar treaty in which Germany gained the strategic island of Heligoland from Britain. In return, Germany gave up its rights to Zanzibar, East Africa. This trading of Islands and people had numerous consequences.

Looking into the history of Heligoland  I discovered that Riefenstahl was connected to the Island, she appeared and partly shot a film called Holy Mountain there in which she dances on the shores of Heligoland. Significantly Hitler saw the film and was impressed enough by this woman to employ her as his propaganda film maker. LF dancing in Heligoland changed the course of history, at least the history of propaganda/documentary film making.

I have an odd piece of memorabilia at home, its a mug decorated with watercolours painted by Hitler of Disney’s Pinocchio and three of the seven dwarves from Snow White. I was given the mug whilst working in Lofoten in Norway for my work called Monocular – a piece that deals with some of the consequences of WW2 on Norway and the subsequent seemingly fascist policy of Norway to Norwegianise the Sámi people. The mug is from a local museum there, which has the original Hitler paintings. It was given to me by the Lofoten International Art Festival curators. (Incidentally Steve Claydon used these Hitler images in his work at the festival). Riefenstahl's film Olympia won best foreign film in the Venice Biennale in 1938 – over Disney's Snow White.

In Ray Müller's 1993 documentary The Wonderful, Horrible Life of Leni Riefenstahl, LF is joyful as she watches her own films. Her face is strange (the joker in Batman?) an odd scar curves from the edge of her mouth up to her eye, perhaps from a road accident she had in Africa. She only speaks of the form of the work, the camera work and composition. There is nothing more to this for her than a job well done.

It is very difficult to believe much of what LF says or writes about herself because she has had to create a biography for herself with which she can live. To do that she has to forget a lot and imagine a lot. For example she explicitly denies using concentration camp interns in her film Tiefland but The Wonderful, Horrible Life shows a paper listing the actors as interns in the camp.

Susan Sontag clearly identifies a fascistic aesthetic continuing through into LF's Nuba images. I cannot help but judge LF, the films if we know the context are a boot in the face. To me there is an utterly resistant stupidity in LF with her insistence that form is pure and is never political, that artist's do not need to bother themselves with politics.