A Page for Anne 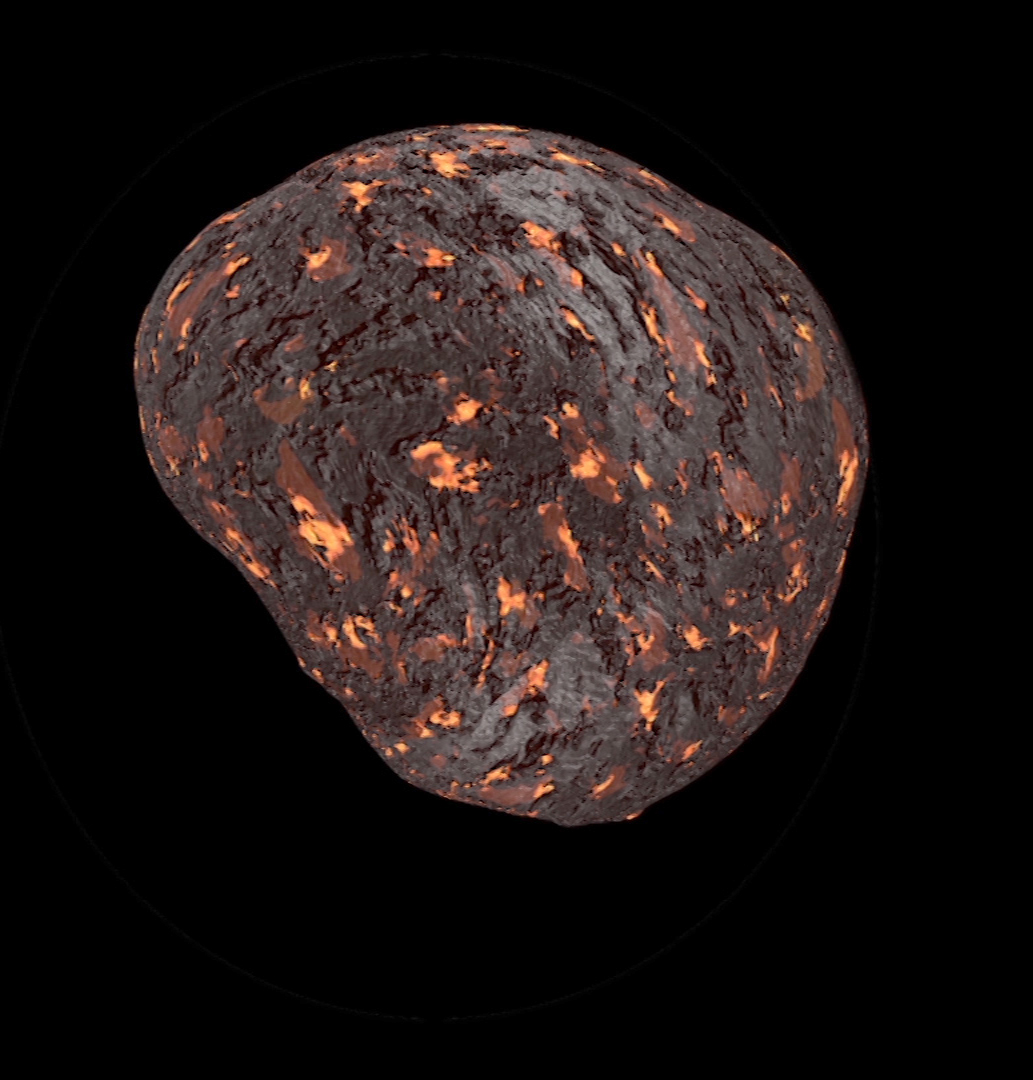 29th March 2017
Dear Anne,
I seem to be turning to my own film as a matrix to contain all of my connections here. Your foam blob and your costume are still vibrating in my mind. In my work in Ambika P3 the rock at the end and the roving red blob (over bewitchment) made me love that nervous wobbling white blob thing that was hovering on your screen – only visible through that portal of the phone.
How the flinching blob reflected on that causal yet fragmented historical narrative was the crux of it perhaps?
In matter – where is history? I feel it is in it? In that foamy blob.
I have been thinking that perhaps something of Bergson’s Creative Evolution is not so bonkers as it may have seemed in the long shadow of Darwinism, where erratic aberrations are at the route of evolution. But maybe there is something in it –  he believed in the organism actually attempting to resolve a problem – through an élan vital? I have a feeling this may be emerging in scientific thought. Not sure but in DNA?
The clothing you made is another thing I am interested in. Dress to accommodate technology but not the body. Hilarious.
The image on my facebook homepage shows a woman dressed in a costume made to make her a Circassian beauty from PT Barnum’s travelling show. The women in his freak show (most beautiful women in the world?) back-combed their hair to look like an Afro – this was a throw back to the slave status of Circassian women who were thought to be the most prized women in a harem…at least that is what I think is going on with them…
Oh yes – BEAUTY, but they weren't’t so beautiful.
Send me your thoughts – or an image?
Lindsay x

Am I right in thinking that your rock is a kind of living magma-rock?

Boarding the plane I found “Meddelelser om Grønland Geoscience” in my bag. I didn't’t intend to bring this book to Oslo… or Cairo! It was going back to the library, but now I know why I needed it! I hadn’t fully understood or memorised the creation myth of cryolite and how it comes into existence through granite melt ie. magma.

On page 49 there is a diagram that shows three possible scenarios of cryolite formations at the post-magmatic stage of granite evolution.

I think of it as a kind of family tree for your rock and my blob.

As far as I can work out, cryolite – a picky mineral, can be lured into existence on very special occasions where certain temperatures and mineral constellations meet.

I would like to think that the same can be said for my blob and the digital ‘organism’ it represents; that on rare occasions under the right conditions, something in this species of immaterial geometry will attempt to solve a problem in a Bergsonian spirit.

I have a feeling this may be emerging not just in scientific thought but in technology itself.

Her theory sounds like it’s connected to Bergson's concept of time in some way, where duration refers to individual, subjective experience of time, as opposed to measurable time.

In your work I feel a particular sensitivity to time, there’s a kind of durational structure and control at play that is impossible to dissect. Like it was made in a parallel world with different durational parameters? The world of technology perhaps?

which I read as “Alternative paths of information”, which I thought was so relevant to what we’ve been talking about the last couple of days and even the way I think about your work and also my own. In a way that’s also true for what is actually written in the subheading; when information and formation merge.

I wonder, can meaning change in a fixed edit of these alternative paths of (in)formation? Looking back at a finished work for example…

Yes I agree time is at the crux of it – temporality is perhaps a better word. HB offers a method – he suggests always answer the question in terms of quality (duration) not quantity (space) – although he recanted that later. Another essential indicator from him is asking the right question. Space needs to be answered through quality but a quality in which all that is circumscribed by the space is part of it and there is little hierarchy – it all matters.  I think you may have tried to get too much information into the performance? Either the quantity of semantic thought could be a crazy over load in quality or strip it back to the most affective words. Sometimes it is the tone of the voice that carries meaning dissolving form. Many things – just seeing your whole figure unbroken, what your proximity is to us, the light value in the room. The absence and presence of speech and abstracted sound. I think your suggestion to enhance what is spectral in the work with video makes sense? Especially for myth …

As your context has so changed – you now being in Cairo I am sending you these images that are about quality. The cameraman may matter more than the subject? He is the authour after all. Often I dress up in character although I am not seen in the work – so as to generate an atmosphere.

That whole missing half of the image – whats on the other side of the lens is after all producing what is in front of it. In these pictures I am directing and filming  – another camera took these as location shots. (The woman I am with has two differently coloured eyes. She has Circassian origins and converted to Islam. I am dressed as a PT Barnum Circassian to effect her relationship to me – and mine to myself – to perform myself as a bastardised colonialist holding the camera). 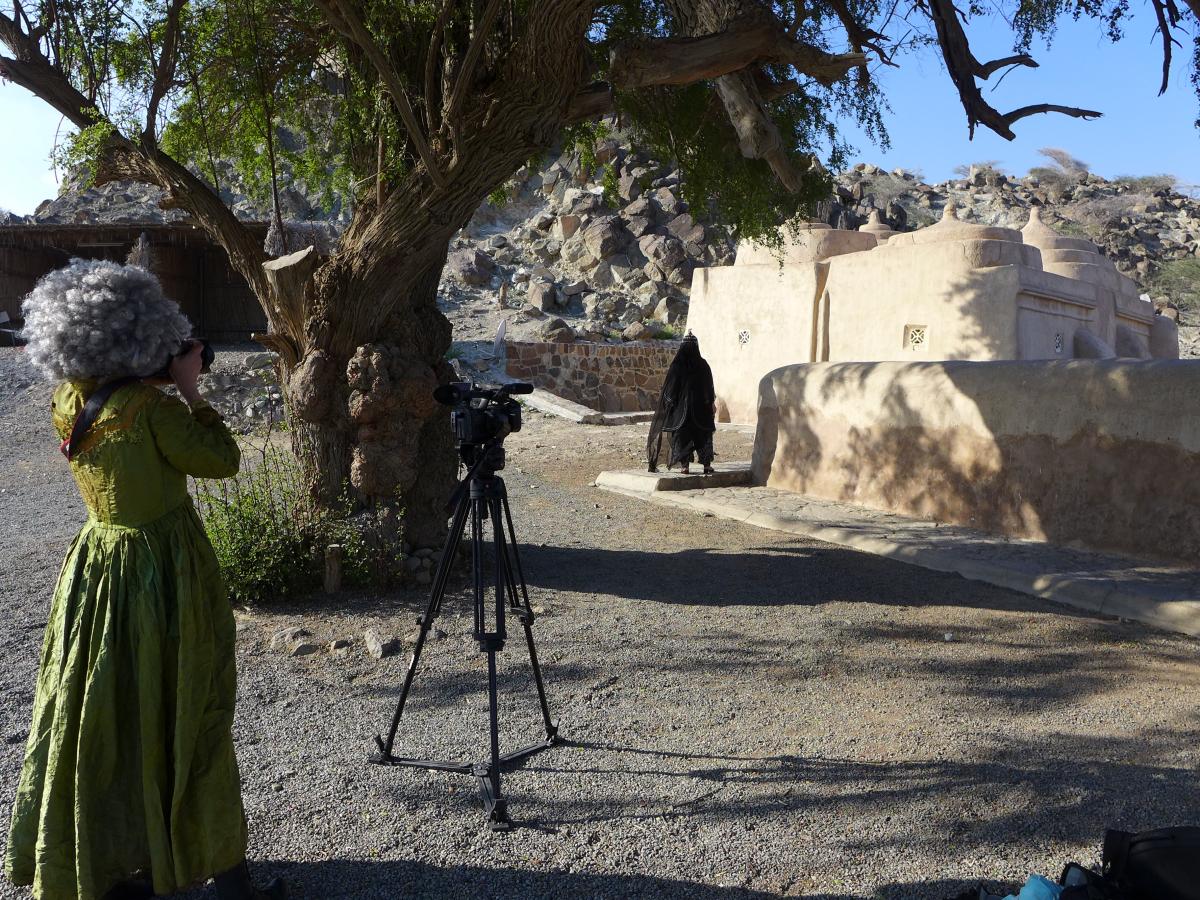 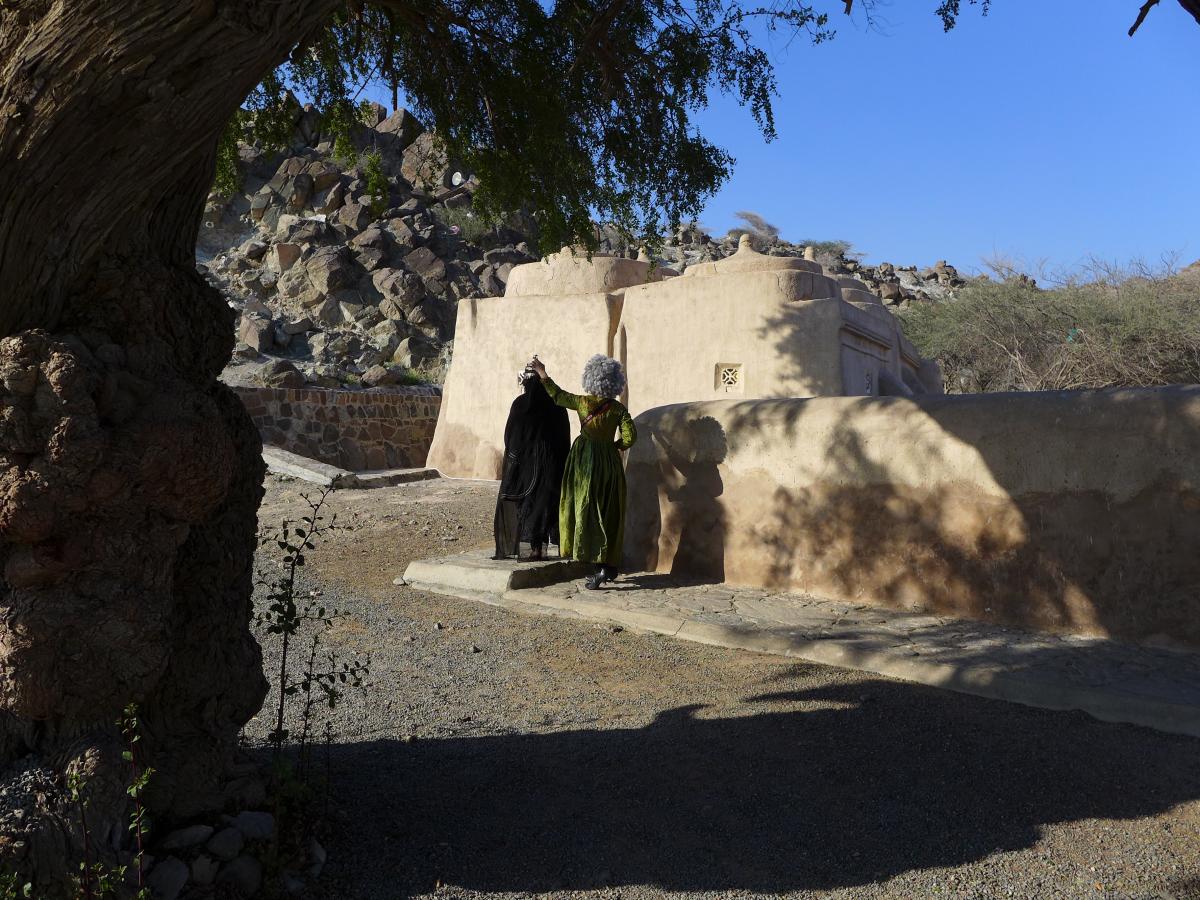 Send me an image – a small work?

Myth and the digital

The role of cynicism