Review and Notes on Suffering by Lindsay Seers 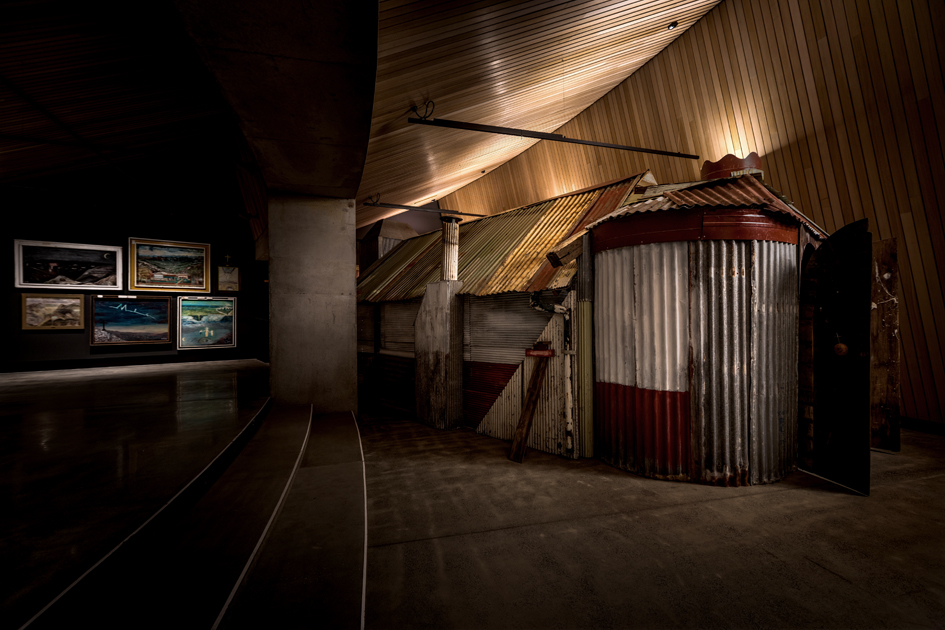 Text from a review in Artlink by Andrew Harper

UK artist Lindsay Seers has been to Queenstown before and made vital work from her visits, but her latest work Suffering is an experience that is almost unprecedented. Seers, with the assistance of Ray Arnold, has made this work about the now-deceased Queenstown resident Leo Kelly. Seers has trod carefully and made a humble and admirably respectful work in homage to this man and his art. She constructed a small tin hut, made from a characteristic type of corrugated iron, and placed small benches in it to encourage people to sit and watch a film in which Kelly may be seen, his voice heard, the interior of his home revealed, and (most importantly) his art seen. Kelly’s painting was an expression of his deep, committed religious faith.
After seeing the short film, one then encounters Kelly’s paintings – his entire output as an artist – and some relics of his encounters with faith. Kelly found rocks and saw the holy Virgin and more in them: these are lovingly preserved and presented as gifts from God. But it is Kelly’s paintings that truly astonish: Kelly was clearly untrained, and possibly hadn’t seen much art, but his strong personal faith is clearly expressed in each and every work. Kelly saw celestial lights and was a visionary. He is raw, but this it not outsider art. He was a private person, who lived in Queenstown all his life, and was well-known about town. It is not entirely inappropriate to compare him with William Blake, the great English poet and painter, for his work is the translation of religious ecstasy and unshakeable belief.
Kelly’s work is the kind of art one hears of, but is highly unlikely to encounter. It is evocative and potent, and seeing it at this festival felt like a remarkable privilege. It is hard to avoid the hyperbolic response here, but Kelly’s work and Seer’s sensitive presentation made for a memorable experience. It was the highlight of The Unconformity for me. It also captured the focus on the people of this strange, beautiful mining town and the powerful sense of community.

For the past two years I have been working with the state of psychosis as a subject. Through neuro-scientific study I have come to see this as a unique brain function found most commonly in schizophrenia. This phenomenon creates a flattening off of space, a lack of filtering of information but also a sense of profound insight into underlying structures of space and time.

My work ‘Nowhere Less Now 5’ (from the episodic work ‘Nowhere Less Now’, of which MONA holds a part) is a story told by a dancer suffering from schizophrenia. (I met her through her family connection to the naval captain who rescued the Princess of Zanzibar taking her to Hamburg in 1866).

My NLN series of works itself was informed by an interim work that I made in Tasmania around the shipping of corrugated metal churches to Australia. My first NLN Artangel work was constructed in such a church (a prefabricated tin tabernacle) in London. It was this fact that drew me to be fascinated by Leo’s corrugated house in Queenstown.

The condition of schizophrenia has been significantly rising worldwide. It has become a subject for philosophy (such as in the writings of Deleuze and Guattari), also in neuro-science (to examine the extent of brain functioning's differences), and in literature (Lenz, A beautiful Mind, Artaud's works, Phillip K Dick etc). These texts and more have all informed the work I have made on Leo as to how radical outsiders can challenge are conditioning and our boundaries and conformity to the norm. In spite of alienation and ostracism, they offer invaluable though to the function of the mind and consciousness.

In the area of painting/drawing I am currently exchanging drawings with five people who suffer from schizophrenia, whilst referring to the paintings of Richard Dadd and artists in the Musgrave-Kinley Outsider art collection. I am working though this subject; my work on Leo is part of this body of works.

The work I made on Leo is the most documentary work I have made to date as I wanted to stay 'close' to him.

I did not feel I could use the footage until after his death – so it was unsure if a work on him would ever be made. The news of his death motivated me to look back at the material and I made a work for Whitstable Biennale with three television sets in a structure including anamorphic images reflected in objects about Leo. At the point of making that first work I had only seen a few paintings in a cupboard as he flicked through them. I heard that the paintings were potentially going to be destroyed after he died and much had already been removed as trash and the house was on its decaying rapidly. It seemed urgent to get back to Tasmania whilst the paintings were still there. Travis Tiddy (director of Unconformity Festival) got an award from Tasmania's Premier specifically for me to come back and make this work on Leo (the budget was very small and could only minimum cover travel and installation costs).

On arriving in Queenstown I arranged to get the paintings from the priest's garage and I had them with me in CSW Hall. We cleaned off layers of dirt and dust covering the works over a number of days. They were on the whole transformed. On daily visits back to his house filming I found more letters, drawings, notes.

It seemed evident that I needed to exhibit the stones and paintings with the film. It was a difficult negotiation to get permission to use the back hall (full of jumble at that time) to show the paintings but in the end it came through. I also took anything of interest that had been left in Leo's house by the executer of the Will (with his consent) and also exhibited these artifacts in the Festival – to give an image of this man and his concerns. He made his own microscope and lenses for example.

Seeing Leo in his house and then the empty house after his death – what he said, how he acts informs us about the intention of the paintings, the extent of his beliefs, his sincerity, his conviction. The film installation shapes ones idea of the truth of the paintings (for him). I used a lot of detailing of the paintings in the film – scaled up in the film and divided into the 'lower and the upper house'.

I have found there to be a shift in perception about an artist's work/intention when one has seen them moving and thinking, speaking. He spoke of his visions as a mystery even to him. They shaped him he did not shape them. He was painting what was shown to him – not what he 'imagined' but what was actual in the virtual world he was party to. The idea of his state of bliss, that fell into continual suffering seemed harrowing and sounded like a negative shift to persecutory voices. He stopped painting – with the exception of 3 works, which took him a few years to complete, for which he tells us he suffered immensely. He was asked to suffer for the world.

I have built the structure in the architectural language of Leo and it is an adaptation of the tin tabernacle I made in Australia. I loved Leo's creative "make do" that went beyond necessity. Everything was reclaimed in his architecture but also completely re-invented, like those amazing red gloss branches under his ceiling in his living room.

The architecture of my structure shapes the film by using the triangle of the roof section as the symbolic space in the screen of the trinity and of the all Seeing Eye.

Who is to say that Leo was suffering from psychosis rather than having divine encounters – it is a fine line? He told me he had met Mary and Jesus many times, particularly by the fountain in his garden.